Hey there! I’m Chris, Long Island’s “real estate guy”. Yet my work life doesn’t consist of just open houses and closing tables.  I love flipping houses on Long Island. I find the diamond in the rough, fix it up and then resell it. Sure, it helps bring home the bacon. But there’s so much more to it than that.

I started out in real estate back in 2000. Engaged to be married, I was consistently laid off from my job as a union sheet metal worker. I was never the type to sit around; being routinely out of work made me nervous. I saw an ad for a part-time real estate agent at an East Meadow agency. I decided to take that time off wisely and took a real estate course, passed the test and got my license.
I started with apartment rentals.  I listed a few houses here and there. I sold a few houses. I started learning the ins and outs of the real estate industry and realized I loved it. I was learning more about Long Island and its history. Eventually I was no longer part time. I was full time although my wife would say 24-7. But this was the key to my success: hard work, dedication and a determined resolution to self-improve constantly. I was diligently in competition with myself. The transactions I completed in one year had to be increased within the next….and the next and so on. I received numerous awards but was humble about them. My wife only knew about them when she saw them collecting dust in my office!

My success also became driven by others. Real estate isn’t simply helping buyers find a home. Of course, that’s part of it. But along the way I’ve met countless people facing hardships. Illnesses, divorces, deaths, relocation…there were some sad stories and situations people found themselves in. And I wanted to help them.

My first “flip” was almost by accident. My advertising representative needed to sell her Levittown house. She was a foster mother and the house was not in the best condition. In fact, it wasn’t mortgageable. But she needed to relocate. She asked me to buy the house. On a whim, I said yes. I took my wife by to see the house and it was pretty bad. It needed so much work, not just clean up, but I was determined to make it work. I had a vision of what the house would look like when it was finished and tried to convey this to my very nervous wife. She encouraged me to move ahead with the project anyway and I did. I wound up finding a buyer during construction so the house was custom-built for the new owner. I did not need to design the house on my own. This came later. A neighbor thought I was buying the house for myself and brought me an apple pie! I didn’t have the heart to tell them the house wasn’t to be my personal residence. The apple pie was delicious! Needless to say, I started to love the thought that I could flip houses on Long Island, while helping others.

Within six months, I had another situation in which an elderly woman had passed away and her children were looking to sell. Unfortunately again due to the condition of this Hicksville house, the house was not mortgageable and the market was hot. I was able to get a good house and due to the crazy market, had a buyer immediately. I was able to clean up the house and re-sell it to the buyer.

Eventually one flip became two flips. Two flips became five flips. And then I was working on several projects at a time. I learned about designing kitchens and bathrooms; which houses fared better with wood floors vs carpet; gas vs oil. I became knowledgeable on permit issues and short sales. Staging homes are key as most buyers need to visualize how the room will look and so I have learned about décor and design. I’ve learned much about Long Island and especially the history of Levittown. I buy houses all over Nassau and Suffolk Counties. Below is a front exterior of a before and after picture from Farmingdale, NY in 2014. 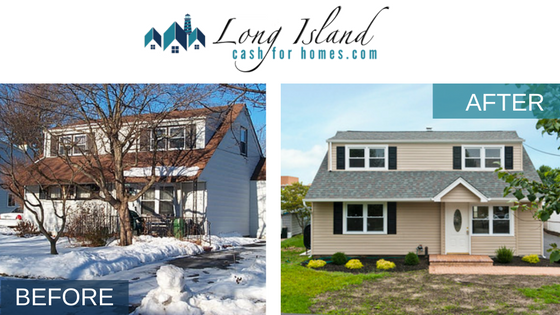 What I Love About Flipping

Flipping houses on Long Island has become my passion.  Flipping houses has taught me to be patient and compassionate with people. Many people find themselves in an unfortunate situation that listing their home on the market is not always the answer. This is where I come in, with cash offers to quickly buy their house. Permit issues are not a problem. The condition of the house is not an issue, either. The houses I buy are always “as is” condition. I have helped people relocate out of state; remove themselves from hairy divorce situations; sell quickly as a loved one was sick; alleviate the foreclosure process and walk away with cash to being anew.

Flipping houses has enabled me to be the “family man” I want to be. I rarely miss a baseball game. I have never missed a dance recital and am known to sneak in some dates with my daughter after dance rehearsal.

I love helping to beautify Long Island neighborhoods. By taking a house that is typically run down and has become a Long Island block’s “eyesore”, I have increased home values and spruced up neighborhoods. I love seeing people’s reactions when I am finished with a project; most especially the neighbors of the home.

My wife recently asked me what the favorite thing about my job is. I can honestly say that the best people I like helping are the ones I don’t buy from. I give them advice. Being frank….. I have received a phone call from someone in tears because she was very ill and needed to sell her house. Her house was worth more than I could offer her. It was more practical for her to sell the house to someone else or list with a realtor. However she had permit issues and did not know where to begin. I stayed on the phone with her for hours and consoled her while giving her step by step instructions on how to get her house ready to sell. Another time, an elderly woman was looking to sell her house and again I couldn’t offer her enough as I knew she would make more money selling to a buyer and not an investor. She had a few issues in the house that needed to be fixed. Free of charge, I sent one of my contractors to her home to repair the issues so she can list, sell and be eased of the anxiety and stress owning a home at her age had caused her. Sometimes people do not realize they can have more money in their pocket and for me it is easier (and right) to point them in the right direction. That is a feel-good situation and genuinely the best part of my job knowing I can assist people who have fallen on hard times.

On the flip side (no pun intended!) the ‘funnest’ part of my job is the finds! A bonus for me when flipping houses on Long Island is when the owner leaves the home’s contents. It makes me feel like I am no longer a flipper but a picker, just like the American Pickers you see on TV! I have come across and discovered some pretty interesting items. Some I’ve given away and others I’ve sold. A few pretty cool items I’ve kept for myself. I even found a car. Yes, a CAR! Pictured below is the 1968 Cadillac Coup deville. I had to scour the house for the keys but luckily was able to find them! 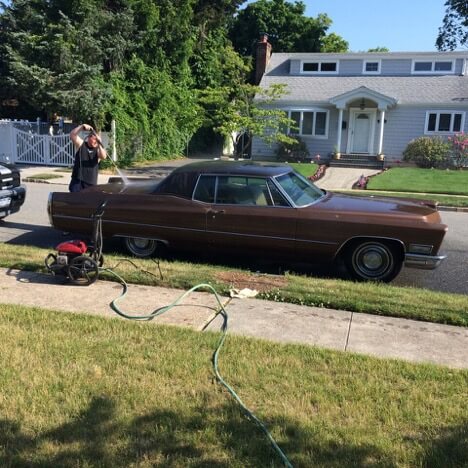